The following is the text from Lesson 7:  The Nature of Deity, part of the self-study curriculum we call The Druid Path. 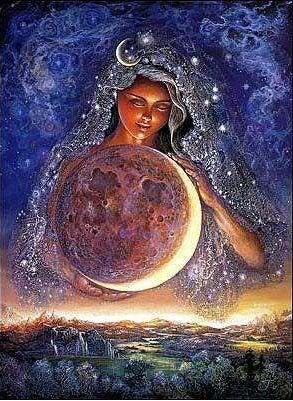 “Go out into the world and speak to
that of God in every person.”
~~ George Fox

“The world is ready for a mystic revolution,
a discovery of the God in each of us.”
~~ George Harrison

“Om purnam adah purnam idam, purnat purnam udacyate,
purnasya purnam adaya purnam eva vashistate.”
“The One is always One,
Each Part of the One is a Complete Whole,
Each part of the Divine is also Perfect”
~~Sanskrit chant

“When did I realize I was God? Well, I was praying, and suddenly
realized that I was talking to myself.”
~~Author Unknown

Keep that last statement in mind.

Religion is a method those of us on this plain use to relate to the deities. It’s like software for cosmic relationships, and there are many different versions (“religions”) for relating with different pantheons. In Robert Heinlein‘s seminal novel, Stranger In A Strange Land, Michael makes it a point to acknowledge the divinity within each of us. As a Pagan paradigm what is this? Is it Monotheism, Polytheism, Pantheism or something else? Or is this a sort of Paganized Atheism? And anyway aren’t the Gods all “made up” anyway?

In the Kabbalah, the ancient system of Jewish mysticism, it is taught that God is like the ocean. Even though we think of there being different oceans, the Atlantic, Pacific, etc., when you view the earth from the South Pole you realize that there is in fact only one ocean. The Kabbalah also teaches that each of us though individuals are droplets in that ocean. When part of the ocean we act and think collectively and this is where the big things like evolution and creation get done. But when we are apart from the ocean we act selfishly in our own interests. Some of you were fans of the television series Star Trek: Deep Space Nine. You will recall the race that really made the most trouble during the series – The Founders, of which Constable Odo was one. You may also recall Odo getting very sick and being returned to his planet of origin where all his people were merged together in an “ocean” they called “the Great Link.”   It is this very idea that is at the heart and center of the Kabbalistic notion of God, and how we as water brothers are also collectively “God” along with everyone else on this planet (and perhaps in the Universe) both alive now and passed on and all the Gods and Goddesses of ancient times (and some modern ones). This makes perfect sense scientifically since our human bodies are made up mostly of water,
almost 2/3rds, just like our planet. To try to alleviate some of the confusion in all this we’ve identified three classes
of deity: The “Archetypes ,” the “Old Ones,” and “Us.” 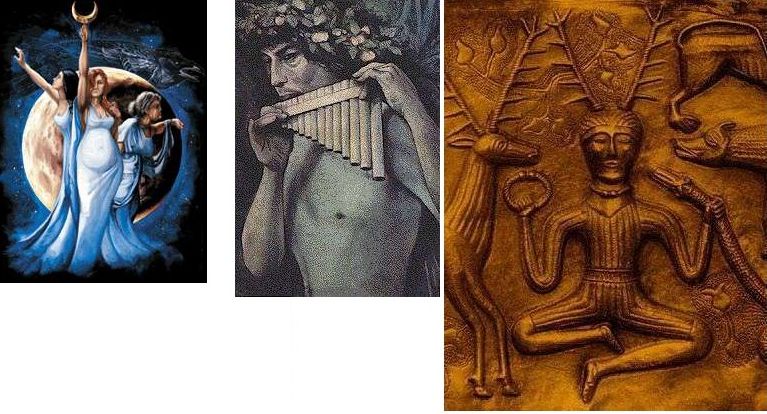 (Pictured above, from left to right, are: The Triple Goddess (Maiden, Mother & Crone)…Pan…Cernunnos)

They comprise all of the famous Gods and Goddesses of old. They are the heroes and heroines of myth and legend who represent human attributes, desires and ideals. You know many of them from school: Zeus, Isis, Thor, Yahweh, Kwan Yin etc. Newer deities from modern literature have joined them as well: Celeborn, Galadriel, Elrond, Gandalf, and others from the Tolkein books are called upon by different Groves from time to time and I’ve even heard of folks who invoke Klingon deities. For the most part, the archetypes are made up out of whole cloth . They are entirely fictional beings; inventions of the human psyche. They can have great power however, depending upon the number and intensity of belief of the people who believe in them. Belief in this case energizes these beings and makes them real and powerful.

A really good example is Asphalta the parking place Goddess. Someone somewhere just made her up. A lot of people started praying to her and it works. This made up Goddess will reserve you a parking place. It even works for me and I know what she is! It can work for any deity. Try it — make up a deity and start praying to her or him. Tell others about it. Pretty soon you’ll have a cult following. This is guaranteed. Among the old Reformed Druids the following archetypal Gods are acknowledged: Dalon ap Landu, Be’al and the Earth Mother or as she is better known, “Nature.” The Order of the Mithril Star added one more: Sequoia . The Reformed Druids of Gaia have as their patron the Goddess Cywarch marth Dalon , who is the daughter of Dalon ap Landu and Sequoia. (These will be discussed in a later lesson). 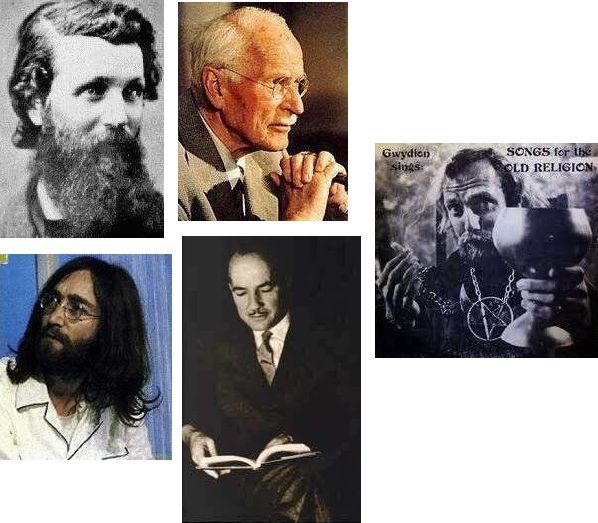 (Pictured above are, from top row: John Muir…Carl Jung…and from bottom row: John Lennon…Robert A. Heinlein…Gwydion Pendderwyn, first “official Bard” of CAW and forerunner of the Pagan Music movement).

The second class of deities, The Old Ones, consists of entities that have actually lived among humans. One thing I like about the Celtic pantheon is that for the most part it is composed of this class. The ancient Celts recognized the principle of “Thou art God/dess,” and as heroes and leaders of the Celts passed on to the Summer Lands they took on the title of God or Goddess. Lugh and Cernunnos are noted among these. Your own relatives; grandfathers and mothers, sisters and brothers, who have passed  away belong to this class. When you pass away you will become a part of this group.
These are the folks who are recognized at Samhain channeled via Ouija boards, via scrying, or by mediums.

Us
Now we come full circle because the third and highest class of deity is YOU . Thou  art God/dess. You have the responsibility and you have the power. It’s your life, your universe, your creation. You can’t run from this responsibility. You can live in denial (most of the planet does) but look around: the rape, pillage and plunder of this planets ecosystem is the result of subservience to other deities and a failure to acknowledge our interdependentness, both between ourselves and the planet (the whole ecosystem) and between each other. We are the caretakers of the universe. It is we who are ultimately responsible for the way resources are used or abused. But we are basically good. Humankind is basically good. People who learn and accept their inherent divinity will not do harm. They will do good. It is only those who have been taught from day one that they are bad, that
they need a big god standing over them with a club, who do harm, because they know no better path. Like wise, those who have been led to believe that their actions affect no one but themselves, have polluted, raped, pillaged and plundered the planet into a global ecological crisis that affects everyone.

As Druids we have the responsibility of being “clergy at large” within the greater Pagan community. We acknowledge that Gaia is a living being and that we and all other humans living on Her are not separate entities but a part of her whole ecology just as we are also all collectively “God.” So we 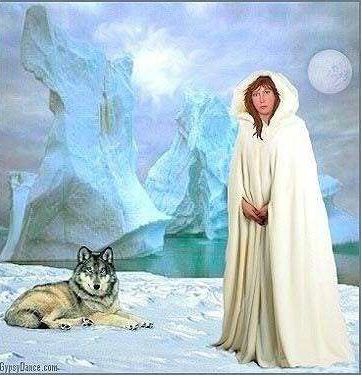 truly are “our brothers keeper.” And if my brother is hungry, or sick, or without clothing, I too am impoverished. “Harm to one is harm to all.” It’s our charge then as Druids and as “self-aware deities” to work towards a just, peaceful and prosperous world. There was once a Pagan music ensemble that wrote a vision, that really expresses the heart of Druidry  and our mission as Druids, working for “for the good of all”: 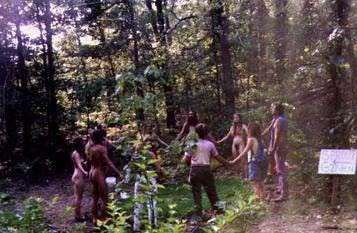 “‘Thou art God.’ It’s not a message of cheer and hope.
It’s a defiance and an unafraid unabashed
assumption of personal responsibility.”
~~Mike to Jubal, SIASL by Robert A. Heinlein