by world banking interests are ushering in a new world order. It may be true, but what of it? Can you do anything about it? Do you even want to? And how do you know that world won’t be a better place than it is now after the fact?

Fundamentalist Christians are the most worried, certain that the advent of the New World Order will also be the harbinger of the Anti-Christ. Since Freemasonry is at the center of the conspiracy there is an abundance of Mason bating and hating among Fundies that rivals the anti-Semitic activities of Hitler’s brown shirts. And of course, anyone conservatives hate is involved in the conspiracy, including, gays, lesbians, Catholics, Jews,environmentalists, feminists, and people of color. An oddity since hardly any of these groups can be found amongst the white bread ranks of Freemasonry.

Still, there is all the circumstantial evidence. Fourteen of 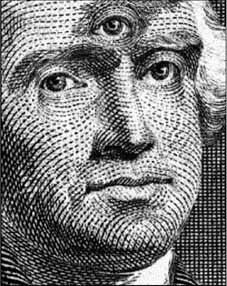 our past presidents were members of the lodge. There’s
all that Masonic symbolism on the back of the dollar: the pyramid with 13 layers, the eye, the 13 stars, the Eagle (itself a veiled metaphor for the mythical Phoenix), the proliferation of the number 13 throughout the design, and the Latin phrasing: “Novus Ordo Seclorum”, A New World Order, and “Anuit Coeptus,” He has smiled on our endeavors. This is just the tip of the iceburg though. The Washington Monument, the 300 foot tall obelisk (an Egyptian symbol) that dominates the Capital Mall is not a monument to George Washington alone, but to all of the Past Grand Master Masons that have ever served any lodge anywhere in this country. Even the colors of the flag are Masonry’ colors.

So what do we make of all this? It is said that the true patriot that loves this country will do all in his power to thwart this Masonic conspiracy and keep this country sovereign  and free. I beg to differ. I would have to say that since the founding fathers were all Masons and the architects of this country, then true patriots would want to be a part of

whatever conspiracy these men crafted. The United States is a model of one world government. Here we have 50 States united under one federal government — a federation. It helps when our terms are defined properly. Everywhere else in the world the term “state” means “country”. Other large countries have provinces or even counties. We have States. That is because each State is in effect a country of it’s own right. That’s why we are the United States of America, i.e., all the countries in the Americas that have united under one government. Presumably the intention was that it would eventually become the United States of the World. History had other ideas, and the wheels of “Manifest Destiny” effectively ground to a halt, first with the failed attempt to invade Canada in the War of 1812, and second with the advent of the Civil War.

It’s no accident that the headquarters of the United Nations is located in the economic capital of the world. The intention is now and ever was, that American culture and business would dominate the world both socially and politically. And won’t it be a better world for all? The science fiction series, Star Trek portrays an Earth under not only a one world government, but a United Federation of

Planets! It’s a world where poverty, ignorance and disease have been eradicated. Where money and property and class are no longer issues of struggle. And (for those who have eyes to see) it’s no coincidence that the writers have placed a number of Masonic symbols in the story structure. The world of Star Trek is indeed the Masonic world vision for our future.

Those who truly love this country, who truly believe that they are patriots, might find the brotherhood of masonry a good home. A place where at least lip service to the real vision of the Founding Fathers is observed.

But maybe not. I’ve just finished reading “The Temple & The Lodge,” by Michael Baigent and Richard Leigh.  That book has convinced me that, as Pogo once said, “We have met the enemy and he is us.”  But my further reflection on this leads me to conclude that the Masons are still evil, but not for reasons of conspiracy.

How many leaders of the civil rights movement of the 1960’s were Masons?  How many Southern Sheriffs, National Guardsmen, Governors were?  How many soldiers and officers in the US Army serving during the Indian Wars were Masons? How many were Masons during the Vietnam
War?  How many Masons participated in the massacre at Wounded Knee?  How many killed buffalo during the slaughter of American Buffalo in the west (a tactic designed to starve native Americans)? Going back into history a little further: How many Masons were among the English/Norman nobles who attempted to wipe out Celtic culture in Ireland, in Wales and in Scotland? How many Masons were among those French bureaucrats who pursued the policy of banning the speaking of Bretagne in the schools of Brittany?  How many served as Inquisitors during the Witch hunts under Cromwell in England?

Here’s my point:  Despite their high ideals, Masons have always backed the status quo.  The participation of individual Masons in actions designed to eradicate the cultures of the American Indian in this country, the Celtic peoples in Europe, the denial of civil liberties to blacks, as well as the unjust and immoral war in Vietnam, serve to show that their high ideals of “life, liberty and the pursuit of happiness” apply mainly to Masons, and not to those who are non-white, non-christian and non-rich.

I am sure that there were Masons on both sides of all these issues.  Historically, there seems to be Masonic membership on both sides of every war and conflict. But, if Masonry is to be credited with “making good men better,” it must be consistent. It’s ethical standard must cause men to do the right thing all the time. History proves this to not be the case, as we have seen.

For the Native American peoples alone, I could never become a Mason, let alone these other issues. However, I am willing to give them a chance.  Show me an active, recognized Native American Lodge, and I will join tomorrow. Or better, show me the names of Masons who participated
in the Civil Rights movement, the peace movement, the union movement. Show me the names of socialist Masons, and homeless activist Masons, and other Masons who are indeed, living by Masonic ideals, and who recognize and censure their brothers who act contrary, and I will sign up.

I believe that the United States is the One World Government of the Illuminati (and the Masonic Lodge).  I also believe that the ideals of Freemasonry are laudable ones.  But I also believe that this great experiment is a failure.  As long as one woman is denied equal pay for equal work, or one child is denied a college education, or one person is denied a job because of his race, religion, ethnicity or sexual orientation, or as long as any person is homeless or hungry, than this country has failed, the Masons have failed, and their laudable ideals are lies.