Alfre Woodward: “How much does this ship (the Enterprise) cost?” 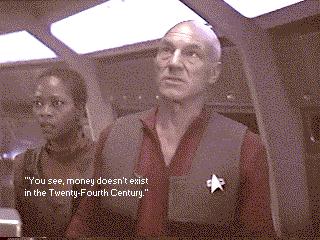 Pixard: “Well, we have a different kind of economics in the 24 century. We
no longer believe that the acquisition of wealth should be the main priority
in life. We believe that our work should be for the betterment of humanity.”

This is of course not the first time the economics of the Federation are referred to in a Star Trek plot. In “Star Trek IV: The Voyage Home” we discover that they don’t use money in the 24th century. We also know from inference, that poverty, sickness, hunger, disease and unemployment are unknown on
earth in this time period.

What’s going on here?
What kind of government does the earth have?

We assume it is a One World Government, a centralized republic much like the United States. It certainly maintains the values of the United States, at least it’s philosophical ones. But in Star Trek the United States of America is now the United States of Earth, and there are no nonmember nations. There is no currency, no central bank. If you need a newspaper or food or a latte, you simply go get it. Need a taxi? Just hail one, it picks you up and no money changes hands.

How is this possible?
It is assumed that everyone works and is contributing to society, so everyone is rewarded equally, and everyone participates in the reward process, serving each other in an egalitarian, noncompetitive manor. The worker making latte’s or polishing floors is rewarded the same way as the manager of a factory manufacturing phaser banks. If each is happy and takes pride in his/her work, why shouldn’t they be rewarded equally?

Actually, there is some competition, but it is for power and status, rather than material gain. This is quite evident among the ranks of Star Fleet, but no where else in society. On the other hand, we get very few glimpses of the nonmilitary side of society.

The society of Star Trek is more or less classless (again, except among the military portion). Egalitarianism means that everyone, from the lowly garbage man to the manager of a business has equal access to all the good stuff of life. It is assumed that all apartments, all housing, are more or less the same, with the same appliances, computers, phones etc., existing in each household.

This makes “Trekkers” or “Trekkies” the unknowing (or maybe not) proponents of world wide Socialism, expanding into the universe under the auspices of the United Federation of Planets.

I am a Socialist. Not a Communist mind you, but an advocate of Socialism as  Trotsky and De’Leon foresaw it to be. We have been unfortunate in this
century and in these United States to have only been exposed to the bad forms of Socialism. It is now revealed that Stalin was able to take power 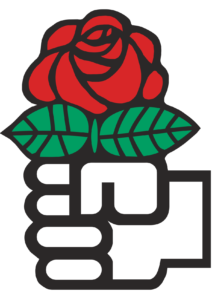 Why do you suppose Americans are not allowed to travel to Cuba? Because Castro, though ruling in a Stalinist fashion, is in fact a Trotskyite. Cuba graduates more physicians than any other “third world” country inthis hemisphere. Further, Cuba’s health care is system is far better than what we have in the United States, as is their educational system. In fact, the only thing keeping Cubans from enjoying the same or better level
of life than the “average American” is the continued boycott of Cuba by the United States government, and it’s allies. The American propaganda
machine has also neglected to tell us that despite Russia’s recent conversion, the Communist Party there is still very much in power (though now a Trotskyite group) and that socialism is still the form of economics practiced (though it is a mixed socialism much like the rest of Europe).

You may think that the media is free and uncensored in the United States, and that is true on the surface. But it is against the interests of the big corporations that own and control the media for any form of economics where workers have control over their destinies to take a foothold on the planet. These corporations, which make up the “shadow” government of the United States  are doing the censoring, not the government.

Socialism is the only power on earth capable of keeping Capitalism in check. Look at the growing gap between the wealthy in this country and the poor. Look at the growing numbers of homeless, and the 70 million Americans who go hungry. Look at the millions of workers now employed at substandard wages, who barely make enough to keep a roof over their heads. These facts, evident in every city in the United States are an indictment against modern Capitalism. But TV doesn’t show us that picture. No, all we see on TV are successful professionals living the “American Dream” and living in swanky homes, driving BMWs and who have to solve problems most working class Americans wish for. Oh yes, it’s all very politically correct. We see gay, lesbian, black, Jewish and other minority groups sharing the American dream too, but never a homeless person. Our egalitarianism doesn’t extend to the poor or the unsuccessful (success being determined by how much money you have, not by the quality of your soul). The working class too, is brainwashed into thinking that someday someway they too will be successful like the folks on TV. They no longer form or join unions because they hope to one day be the “oppressors” (Nog, Quark’s brother’s own words) themselves.

Like the episode of Star Trek: Deep Space 9″ where the workers at Quarks’ formed a union (at the suggestion of Dr. Basher). At first there was opposition to the union, because after all, the workers all want to someday be the bosses themselves. But the influence of Socialist, er, uhm, Federation style thinking soon asserted itself, and the episode ends with justice for the workers. Well, sort of. You’ll have to see it for yourself.

Runaway, American style capitalism is a subject Star Trek addresses. The Ferengi are representative of just that. Take a look at their society for an exaggerated mirror image of our own. It soon becomes easy to picture Bill Gates with Ferengi ears, doesn’t it?

It seems therefore natural, that Star Trek continues to be a favorite among working class audiences, who, at least on a subliminal level, long to live in that society, and escape our own.

We don’t have to wait for Cochran to come along and invent warp drive, in order to bring this about. We can start now, by Unionizing our workplaces, and our apartment complexes. By fighting for labor rights, for a national health care system,  for higher minimum wages, or rather, better yet, the abolition of the wage system, and the accompanying class system, altogether.

Workers of the world unite. You have only to lose your chains.