Skip to content
The reasons we insisted originally on Domes for housing at Dryad’s Realm are:1) When we lived in Ashland, Ceridwen worked for Pacific Domes, and we would get a substantial discount. (Update: We’ve rethought this some. Pacific Domes, although quite beautiful, are little more than glorified tents. We have Cougars here in the Northwest. Their claws would shed through a dome like butter. We think a more practical solution is here: http://www.deltechomes.com )
2) By having all the homes alike, we avoid some of the problems reported by other intentional communities regarding competition for the “better” dwellin 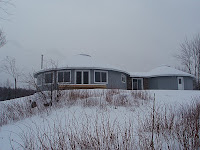 gs when one become vacant:
“At Breitenbush, some staff houses are two or four bedroom affairs with bathrooms and kitchens. Others are tiny spartan cabins with heat and electricity and little else. Go to a housing meeting when one of the nicer houses is on the block. Watch love and unity dropped like bad habits. Hear them hit the floor with a thud. When resources are limited, humans (all animals for that matter) historically compete for them. Competition for limited resources. In a word: war. Yet battlefield tactics may vary greatly in subtlety and efficacy, and I must now say that the most inane non-arguments I have ever heard, I have heard at our housing meetings. Bar none.” (Complete article at http://www.alternativesmagazine.com/05/mcdevitt1.html )
3) It is believed that “round” living spaces are more conducive to spirituality than “square” ones. Some Native American tribes say that spirits get trapped in the corners of square houses. I know that when Ceridwen and I lived in the cabin in Oregon (an eight sided “Yurt like” structure) we felt more “free” and happier in that space. Having lived there about 3 years, I now believe that it’s simply not natural for human beings to live in boxes. I think it affects your energy, your thinking and your whole life-force. I can’t wait to get out of this “box” we’re in now. Some of these ideas are better explained in the following page on “Sacred Geometry”: http://pacificdomes.com/sacred_geometry.html
4) Convention: Square homes are common; conventional. Round homes are not. Paganism, naturism, polyamorism, are also all unconventional, and all these are lifestyle choices that fly in the face of the normal. Monotheism, body-shame, and monogamy (to name just three) are all very conventional, and all have contributed to most of societies ills. In fact, I believe that if we could rid the planet of these ideas, these “cancers,” we could end war, poverty, most mental illness, all unhappiness, and bring about the dream we dreamed in the ’60s: the Age of Aquarius. Why be conventional in our homes, if we’ve given up conventionality in our religion and our lifestyle?
(1st Written 12/08/2006 and published on my old Yahoo 360 blog)
Posted 12th July 2009