I’ve been a “happynekkidpagan” for a while now. I cut my teeth on the Charge of The Goddess, which states:
“And as a sign that ye be really free, 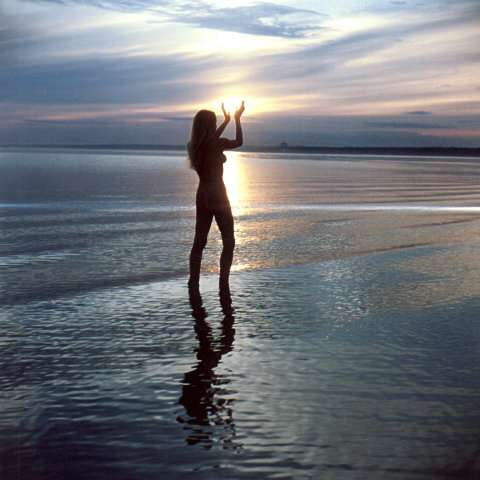 ye shall be naked in your rites.” I’ve attended numerous Pan-Pagan events over the years, and many people choose to run around naked at these clothing optional
events. I myself find it to be natural. After all, “if the Gods had intended us to run around naked, we would have been born that way.”

It also seems to me (having been Christian for a time) that this is a practice that differentiates us from the Christian-influenced society around us. The book of Genesis plainly states that after committing that first sin against Yahweh, Adam and Eve clothed themselves, because they discovered they were naked. When Yahweh discovers their sin, he immediately asks them “who told you you were naked?”  Wearing clothing then is the sign of one who has broken the laws of Yahweh and is in need of salvation.

And for us, nudity should be a sign to the world that we don’t need salvation. I highly recommend the practice of answering the door naked when you know that it’s “Yahweh’s Witnesses” or some such  knocking. You are making a statement to them: “See, I am naked and unashamed. I am free of your “original sin.” I have no need of your Jesus or his blood.” Of course one could ask them, “Why aren’t you naked?” “If Jesus has washed your sins away, if he has freed you from original sin, why aren’t you naked? It’s obvious to me it didn’t take.”

Part of the problem is that we are all brainwashed from early on by a very sick society heavily influenced by the Judeo-Christian paradigm. Nudity is equated with sex. Being nude is naughty and “always leads to sex.”  Women who are nude are just asking to be raped. Nudists are viewed as sexual deviants or sex maniacs, or at the very least, exhibitionists. Nothing could be further from the truth.

There are good reasons for this: If the connection between being nude and sex were to become obliterated society-wide, a major economic impact would be felt throughout. The porn industry (at least the softcore porn industry) would be out of business. Advertising (which relies so heavily on semi-nudity or the hint of nudity) would go through a revolutionary change. How do you use sex to sell stuff, if semi-nudity and nudity are the only ways to convey sexuality in media? Further, if the majority were to become nudists, the clothing and cosmetic industries would be heavily hit. If people are only wearing clothing half the time, and when it’s
necessary, choosing utilitarian clothing, what happens to the fashion industry? Aside from the belief among nudists that nudity does not imply sexuality, there is also the belief that nudity brings equality, and brings body acceptance. You almost never see perfect bodies at nudist resorts. In fact, you see a lot of normal everyday people. No implants, no plastic surgery, and usually no makeup. You do see embellishments, such as tatoos, (and among younger nudists) body piercings, and such practical safety measures  as hats and shoes, and it seems like body painting is becoming a new trend. You also will find it difficult to differentiate between the rich and the poor. Nudity is the great equalizer.  It doesn’t matter whether you are tall or short, fat or thin, work out or watch tv all the time. It doesn’t matter whether you are black, white, Asian, Indian, nobody cares. Connections are made on the intellectual level, not on the surface. No wonder the greater society needs to keep nudism a minority practice! It’s all about money.

As for the sex issue: I have been to nudist resorts, nude beaches, and the aforementioned clothing optional Pagan events. I have never witnessed anyone having sex, or even petting. For that matter, I have never seen a man with a hard-on, or a woman with an engorged vulva.  Lot’s of hugging, and even kissing goes on between friends and couples but no sex (but that goes on at clothed gatherings as well). That’s not to say sex never happens. It probably does, but in private, just like among any other social group.

So, why are some Pagans afraid (that’s really the only word) of nudity? There are even some who go so far as to forbid it. Why? Well, part of it is the social brainwashing I have already spoken about. The other is a misguided belief that we have to discourage any practice that is unacceptable to the greater society in order to become accepted by that society. But why is that important? Why do
we want to be like everyone else? Sick, twisted, and enslaved to the whims of Madison Avenue?

Damn it! We are social revolutionaries! If we are going to change the world, if  we are going to reawaken Gaia, and bring balance back to this planet and the environment, we have to change society. The only way to do that is be different and be proud of that difference. One place to begin is with acceptance of our own bodies, and acceptance of each other. With warm weather coming, you can start the revolution in your own home. Just say no to clothing.