Let’s start this with the Six Day War. In June of 1967 the forces of Egypt, Jordan and Syria attacked Israel.
Egypt lost it’s butt, and Jordan lost a lot of land. Specifically, East Jerusalem and Judea/Samaria (the west bank of the Jordan). The important thing to bear in mind here, is that Israel was attacked, beat back the attackers and took back the west bank. This was not the first time that Arab states had committed aggression towards Israel. A multi state attack was instigated in 1948 and again in 1973. Each time the Israelis beat their enemies back. Also each time, the Arabs instituted waves of propaganda against Israel. The Jews “stole” the land they say. But all of Israel’s land (including the west bank) was purchased from the Arabs prior to 1948. But the Arabs didn’t see it that way, especially after the “worthless” desert they sold to the Jews was made to blossom and flourish.

The Jews have lived in Israel since pre-historic times. The land was conquered many times by foreign invaders who sometimes exiled the Jews, but the Jews always have returned. The name “Palestine” was given to the land by the Romans. In 70 AD the Romans sacked the Temple, and most Jews fled the land. Throughout the Middle Ages (like, whenever a pogrom hit) small numbers of Jews returned. Most settled in Jerusalem, Safed, and Hebron (the three Holy cities)“Arabs ARE NOT and NEVER HAVE BEEN the original inhabitants of the area. If you have ever read Mark Twain’s “The Innocents Abroad”. Clemens documented the Arab migration into the area, looking for jobs from the Jewish immigrants. The actual original inhabitants were, Jews, Druze, Kurds, Bedouins, and Samaritans. There are less than a thousand Samaritans left due to genocide by the hands of the Arabs. The IDF protects them from total extinction. The Kurds and Druze are considered to be heretics by their Muslim neighbors. The Kurds are Israeli allies and the Druze are Israeli protectorates. Otherwise they would be massacred like the Samaritans. Gaza is actually owned by the same five families who owned it during the Arab migration. They used to hire the Arabs to murder Bedouins to clear the land for development. The Bedouins are now Israeli citizens and the backbone of the IDF (and the hospitality industry.) As far as I’m concerned, anybody who believes the Arab claims is either a total anti-semite or simply too lazy to fact check.”— Bill Dunlap

From the 1800s when the Zionist Movement began, right up until today, the Arabs have been offered, time and time again, land for their own use to govern as they will. They have rejected these offers over and over again. WHY? Because the only thing in their pointy little heads is that the “Jews don’t belong here, and we must drive them into the sea.”They keep talking about a “Palestinian Homeland.”

I bet you didn’t know that one already exists. It does. Under the British Mandate (the government prior to Israels independence) the area now known as Israel and Trans Jordan was called (by the Brits) “Palestine.” As a reward for service to the Crown, Trans-Jordan was given to the Arabs and became “The Hashemite Kingdom of Trans Jordan.” So basically, the Brits took a large part of the land promised to the Jews (In the Balfour Declaration) and gave it to their Arab friends. Incidentally, in 1948 Jordan took the west bank from Israel, then lost it back to them in 1967, as we have already pointed out. What I am saying here is that Jordan IS the “Palestinian Homeland.” Period. They sort of acknowledge this. Look at these flags: 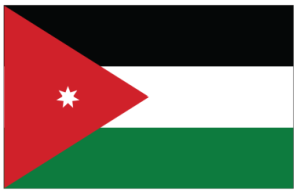 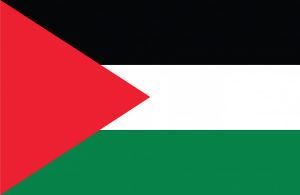 Not much difference is there?

All this not withstanding, the “Palestinians” seem to be winning the propaganda war. The BDS movement (Boycott, Divestment and Sanctions) has chapters in almost every University in the United States. The “Palestinians” have practically completely pulled the wool over the eyes of many people on the Left and Far Left of the political spectrum. Of course it’s also been embraced by those on the Alt-Right, particularly anti-semites. Even some Left oriented Jews have drank the Kool-Aid. But it’s all based on lies, as I’ve pointed out. Not to make too big a thing about this, but I personally am as far left as you are likely to find. But I stand with Israel. I haven’t partaken of the Kool-Aid. Another popular lie is that Israel is “occupying” the west bank. The propagators for this deception actually mean to imply that Israel occupies all of “Palestine,” but they don’t usually go that far. That would be a tell. Israel does not occupy anything other than what is fairly and squarely Israel.

There is another “Palestinian Homeland.” In 1994 Israel, granted the “Palestinian Authority ” in Gaza limited self-governance through the Oslo Accords. Since 2007, the Gaza Strip has been de facto governed by Hamas, which claims to represent the ‘Palestinian National Authority ” and the Palestinian people. (Incidentally, there is an argument that Israel may have unwittingly created Hamas).  Hamas is a terrorist group, and uses Gaza as a base to launch rockets into Israel. They also build tunnels right up to edge of nearby Israeli cities and launch terror attacks from those tunnels. They also like to hide munitions in and around schools and hospitals – anywhere they can use civilians as human shields. You’ve noticed perhaps my use of quotation marks around the word “Palestinian.” That is because they do not exist in any reality .