This is by no means an exhaustive survey of the occult origins of our national symbolism, but we will at least cover the more obvious ones.

The flag consists of 13 stripes alternating red and white and a blue field with 50 five-pointed solid stars on it.  We share the colors (red, white, and blue) with a host of other nations whose revolutions were instigated by members of freemasonry.  The stars, as we mentioned are five-pointed.

In fact they are Pentagrams and any hand stitched flag bears this out, since the stitches are always in the form of the Pentagram. The Pentagram as a religious symbol is shared by many Pagan religions (Wicca, Witchcraft, Ceremonial Magick, to name a few) and stands for the five elements: Earth, Water, Air, Fire and Spirit. It also stands for humanity (If you stand in a certain way your head, arms and legs form the Pentagram).  Each of these Pentagrams stands for one of the 50 States and it’s ruling spirit (these taken from the lessor key of Solomon, a medieval grimoire). The Pentagram is said to control these spirits.

There are also thirteen stripes, ostensibly for the original thirteen states, but thirteen has a major occult symbolism as well, as we shall see.

The number 13 occurs over and over again in our national symbols, most notably on the flag and on the “Great Seal of The United States“, illustrated on the back of the dollar bill.

The 13th card  in the Tarot is “Death,” and for this reason has always been considered as unlucky. But “Death” is interpreted as change, not necessarily dying, so for certain people “13” would be considered lucky.  The founding fathers were well aware of the
significance of the number “13”.

The eagle is interesting because it was chosen as a symbol of strength and cunning, of lofty places, and of freedom,  yet the real eagle will only attack an animal that is smaller than itself and will in fact eat carrion if it can find it.  Benjamin Franklin wanted the turkey 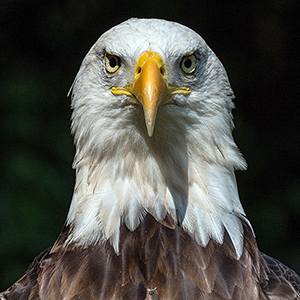 to be the national symbol but he was voted down.  So what could be the
real meaning behind the eagle? I would suggest that eagle is  a form
of the Egyptian Phoenix, the mythical bird who is destroyed by  fire than rises reborn from it’s own ashes.  This is a symbol of occult power, and a symbol of the old colonial system being destroyed and a new system, a new world order arising from the ashes of the old  monarchies.  Indeed, the latin motto, “Novus Ordo Seclorum” means “a new order for the world,” aptly symbolized by the eagle.

The Statue of  Liberty 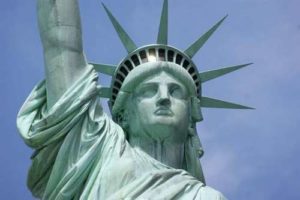 the most famous American symbol of all, albeit a fairly modern
one.  It was the gift of the Government of France to the United States.
Lady Liberty also  graces the top of the rotunda of the Capital building in
Washington D.C., albeit in a different form.

Who exactly is she? Lady Liberty is a Goddess, and in fact she is Astara (notice the crown of light beams) and she stands at the very gateway of the new world, lighting the path for those who seek her wisdom.  Her other names are Ishtar, Isis, Ashera, Venus, Aphrodite, Danu, the mother of God, the Queen of the universe, the Queen of heaven etc. She is all of these and more, holding
the book of wisdom in one arm and the light of knowledge in the other.

The giant  Obelisk which sits at the end of the reflective pool in our nations Capital is an Egyptian symbol, a memorial to our first President: George Washington.  But what else is it?  It’s hollow inside and on the inner walls are thousands of small bronze plaques, each 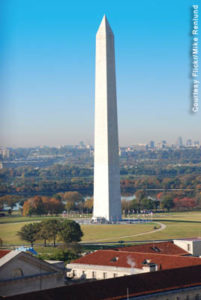 bearing the name of a Past Grand Master of a Masonic Lodge in the United States (George Washington being the first so honored). So the Washington Monument memorializes Freemasonry’s influence in the very beginnings of our nation.

The entire city of Washington is said to be laid out on an elaborate occult grid, containing Pentagrams, Egyptian symbolism, and actually laid out in the manor of a Masonic Lodge.  There is much ink written to explain all this. Don’t take my word for it. Just do Google search for “occult Washington DC,” and you will be amazed!

From time to time I will add to this page as I discover more meanings behind the symbols I’ve already mentioned and symbols I’ve yet to cover.