I’m on the Facebook group,  Humboldt Progressives.  This not the same as Humboldt Progressive Democrats.  Both groups are for people living in Humboldt County CA who identify as Progressive,  The former group has 1.1k members, while the later only has 410. I’ve been a member of the former for about a year.  The later I was a member until I was kicked out several months ago because I am an unabashed Zionist.

So, it looks like I’ve done it again.  I posted this recent article  about Congress person Rashida Tlaib‘s nonsensical litmus test that a Progressive cannot support Israel and still be a Progressive.  Three people raised objections, all of which agreed with Tlaib.

To these idiots Israel is a colonialist, apartheid, theocracy which is committing systematic genocide on the “indigenous “Palestinian” population.”   A pack of pure lies, largely made up by the KGB.  Israel is not apartheid (Arabs serve in government, in the IDF, as Doctors, as lawyers, etc. If Israel was apartheid they could not). Israel is not a colony – Jews have lived in the area for 4000 +/- years. There is a huge Jewish cemetery in Jerusalem that has been used for 2500 years. Israel is not committing “genocide” (the Arab birth rate has tripled, and the Arab population has quadrupled since 1948). Israel is not a “theocracy,” despite it’s identity as the Jewish State,  is not governed by Rabbis but by  essentially democrats.  On the other hand, LBGTQ persons are routinely thrown from the tops of buildings in Gaza. Women are 3rd class citizens, having few if any rights in PA governed areas. Meanwhile the Govts of Syria and Lebanon have murdered 1,000s of “Palestinians,” barred them from any of the professions etc., yet it is Israel that is accused of wrongdoing. That’s antisemitism. That is not a Progressive value.

Rashida did come up with a label for those of us who are Progressives and support Israel: “PEP” – “progressive except for Palestine.”   I like it! I’ll proudly wear that label.  Except I believe that supporting Israel IS a Progressive value. After all, Israel is the only democracy in the Middle East.  Israel respects the rights of women, of LGBTQ people, all Israelis (whether Jewish, Moslem, Christian, Pagan or whatever), enjoy freedom of religion, freedom of speech, the right to vote in fact all of the rights outlined in the United Nations Declaration of Human Rights. The same cannot be said of hardly any Islamic country or in Gaza or in the PA controlled areas of Samaria/Judea (aka “the West bank”).

Is there a label for the glaringly anti-Semitic views of these so called “Progressives.?”  Not yet. But I would propose “PEJ” – “progressive except for Jews.”

But first, notice the masthead. Pretty impressive don’t you think? It’s a fraking Facebook Group. The total membership is 382. The total number of members who actually post is about 12. There are three Admins and 1 moderator. They say they are an official Democratic Party Club, chartered by the Humboldt County Central Committee. It’s a Facebook Group. Give me a break. 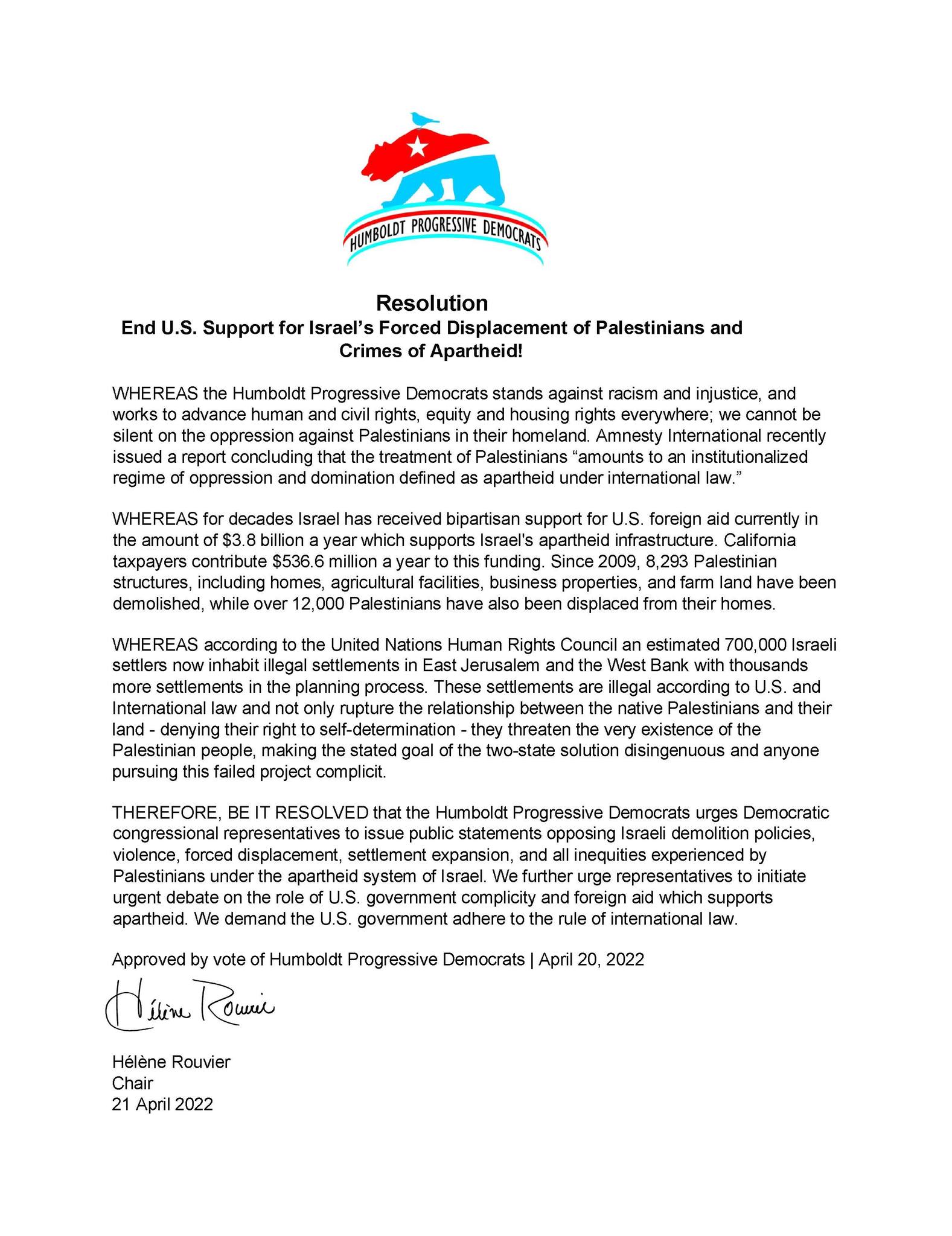 It amazes me that so called Progressives, who allegedly believe that women are human beings, that they have the right to healthcare that includes the right to choose an abortion, that members of the LGBTQ community should have equal rights, that trans-children should be given the opportunity to become their true selves ….. that they will attack and vilify Israel, where all these things are true and practiced, yet defend the “Palestinian state,” where NONE of these things are true and practiced. But, moving on …….

Let’s find out exactly what the definition of “Apartheid” is according to International Law:  “Apartheid refers to the implementation and maintenance of a system of legalized racial segregation in which one racial group is deprived of political and civil rights. Apartheid is a crime against humanity punishable under the Rome Statute of the International Criminal Court.” (Source: https://www.law.cornell.edu/wex/apartheid)

What’s the problem here?  Arabs and Jews are of the same race. They are both Semitic peoples.  But, according to International Law, Apartheid is a system of legalized RACIAL segregation. So, Amnesty International gets it wrong. Or, they are using their very own special “customized” definition of apartheid, designed to paint Israel with a very broad brush.

This is true, but there are good reasons. The Palestinians in question built houses, business properties and created farms on land that did not belong to them. Some of them, like those in East Jerusalem, stopped paying rent to their Jewish land lords. What happens here in the US when you stop paying your rent? You get evicted.  The same is true in Israel. If you don’t pay your rent you get evicted.  Israel is, after all, a Social Democracy built on Capitalistic principles, just like Norway, Sweden and Denmark.

Therefore there is absolutely nothing illegal about what Israel is doing on it’s own land.  They have even given considerable concessions to the so called “Palestinians,” allowing them to self govern parts of Judea/Samaria.

There are a couple of amazing conclusions in the resolution here. First, there is no US law governing Israel, which is  a sovereign state of it’s own. 2nd, the United Nations is not a one world government (which, by the way, if you look further in my blog, you will find that I am an advocate of just that).  What Israel does is it’s own business. Does Israel deny the “Palestinian” right to “self-determination?  They have their own government, really, their own little country in Gaza. But, they also have “chosen” terrorists for their leadership, so things might not be working out so well. “They threaten the very existence of the Palestinian people….” This sounds like an accusation of genocide to me.  If true, the Israelis have failed miserably at this. The Arab population of Israel has sky rocketed since 1948. 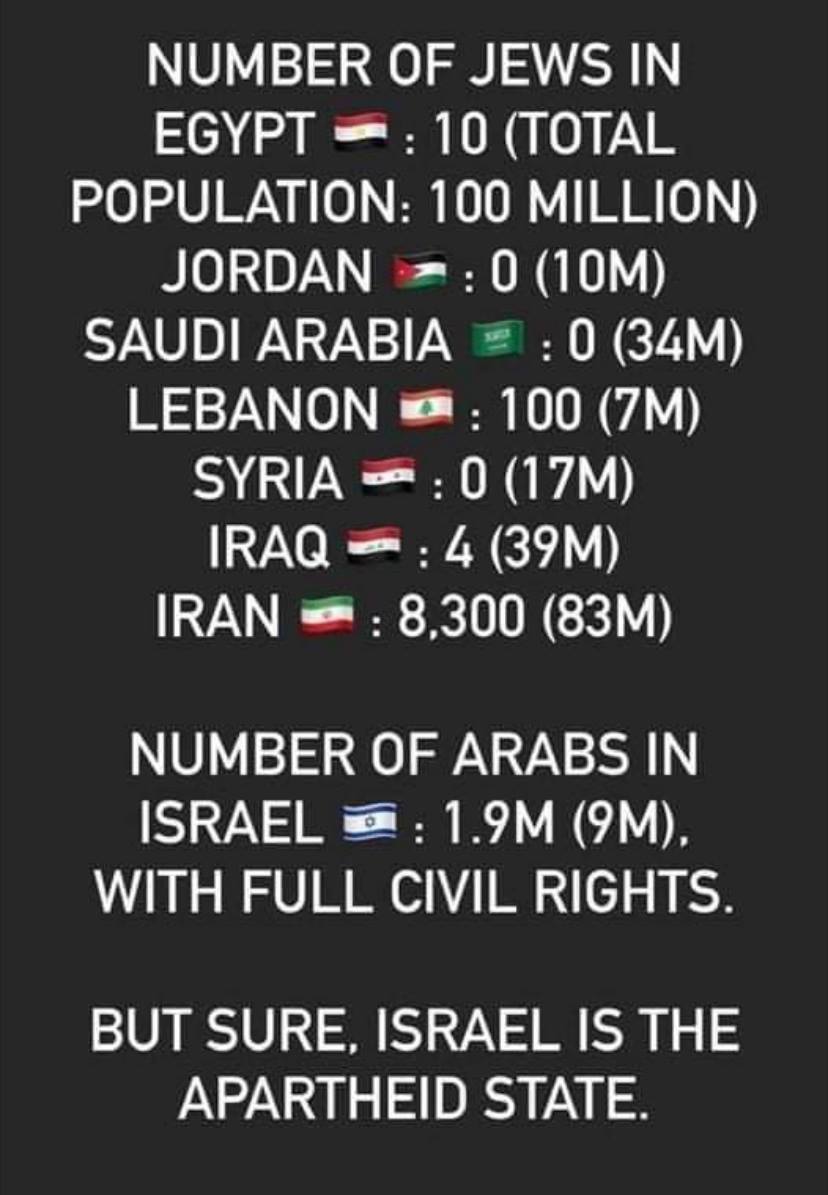 Yes the seven, er, 382 members of a Facebook group urges Democratic members of the House of Representatives to do something. Yeah, that will happen. Of course here we have another repeat of lies authored by the propagandists of the “Palestinian” people.

It just isn’t going to happen. Israel is the only democracy in the middle east. And, thanks to Jared Kushner (Trumps son in law) lots of Arab nations (outside of the Palestinians) are making treaties with Israel, and reaping the benefits of Israel’s prosperity and technological advancement.

It’s weird. Trump did exactly two things right while he was President. He moved our embassy from Tel Aviv to the Israeli capital – Jerusalem, and he recognized Israel’s control over the Golan Heights. Of course, he also committed a boat load of felonies, was impeached twice, and attempted a coup d’etat, but no ones perfect, right?

Anyroad, as I was saying the noble and glorious resolution of the Facebook group, Humboldt Progressive Democrats, isn’t fit to be used to wipe my ass with after a healthy crap.

I live in Humboldt County California. I am a Progressive, and I am a lifelong Democrat. So, I thought it a natural fit for me to join the Humboldt Progressive Democrats on Facebook.

Boy, was I wrong.

I am an unabashed, maybe even radical, Zionist. I believe that the State of Israel has a right to exist, and a right to protect itself against all enemies, foreign and domestic.

I do not believe that Israel is a Colonialist state (how could it be? Jews not only have a historical claim to the land, but there has never been a time when Jews did not live there (witness the Cemetery in the Kidron Valley, on the eastern wall of Jerusalem, which has been in continuous use for over three thousand years. ALL of the grave markings are in Hebrew)).

I do not believe that Israel is practicing genocide against the Arabs living within it’s borders. How can that be true when since 1948 the Arab population of Israel has increased ten fold? If they are practicing genocide, they sure aren’t very adept at it.

I do not believe that Israel occupies Judea/Samaria (aka, “The West Bank”) or Gaza. 1st, Judea/Samaria was a part of Israel prior to the May 1948 war, when five Arab nations attacked Israel to “drive the Jews into the sea.”  Jordan was able to capture Judea/Samaria and a good part of Jerusalem in that war. Jordan occupied it until June of 1967. when Israel was attacked again, only this time Israel better defended itself and liberated Judea/Samaria and all of Jerusalem. Israel does not occupy Judea/Samaria because it belonged to Israel in the first place.

Gaza was given independence by Israel, to rule itself as it wishes. After this, the citizens of Gaza allowed a terrorist group, Hamas, to take over. As a result, travel from Gaza into Israel is severely restricted.  For that matter, Gaza also borders Egypt, which also severely restricts travel. One wonders what Egypt’s justification is? (One also wonders why no one mentions this fact?)

Many Democrats believe in a “two state solution.” I agree with this, only I believe that the two states, one for the Jews and one for the Arabs already exists in “Palestine”.  You see, the area of land we call Jordan today, and the area of land on which Israel lives, used to be called the “British Mandate of Palestine.” It was this entire land that was promised to be a homeland for the Jewish people by the Balfour Declaration. But, Britain, as they always do, partially reneged and gave two thirds of that land to the Arabs, forming the Kingdom of Jordan.  Jordan and Israel are “Palestine”. There is an Arab “Palestine” (Jordan) and a Jewish “Palestine” (Israel).  Let the Arabs live in Jordan and leave the Jews alone.

But back to Humboldt Progressive Democrats. Because, on these pages, I declare myself a proud and unabashed Zionist, I automatically am not Progressive. I am told I am regressive. So, it’s kind of like a religion, or maybe a cult. If you don’t drink all of the Kool Aid – every last drop, you can’t play in their sandbox. I’m not too worried.  They only represent about 383  members. There is another group, Humboldt Progressives, that I also belong to, that has 1.5 thousand members. Probably a mixture of Democrats and Green Party members. So far I’ve survived there, but, no one has posted any Palestinian propaganda for me to refute as yet.

Oh yeah. I forgot to mention that I quit the HPD group when one of the people I was arguing with 1)told me I wasn’t Progressive, 2) Used “Palestinian” news sources (so, very, very biased) to refute my arguments. 3)Used Jewish anti-Israel sources also to refute me (yes, there really are such folks. It boggles the mind). The straw that broke the camels back was when, in the thread I was working in, an Admin posted this little gem:

Why did I quit? Look at the date: this was voted on while I was making my arguments, meaning, that at least part of the group had turned against me on principle.  How many voted for this? I have no idea and that fact isn’t revealed, If HPD is really a democracy, then we have to assume that a minimum of 192 voted for it.  Do any of the other 191 support, or at least. sympathize with me? Well, no one has contacted me. In reviewing the participation of the group, fewer than twelve actually ever post. So my guess is that a majority consisted of maybe seven people.

There are a number of troubling allegations, and stretches of the truth in the above document. I will pick them apart in my next blog.