Are you thinking about joining AARP? Maybe you received a note in the mail inviting you to join when you turned 55?

Allegedly, the AARP advocates for seniors and especially for Social Security recipients.  I’ve been with them since I turned 55  (I am 68 now), but honestly, I have seen no evidence.

What about the benefits?  Their car insurance is way way higher than you can get elsewhere, and you accrue substantial savings taking your insurance business elsewhere.  I can get a quote on my 2016 Toyota Yaris (full coverage) for a significant savings anywhere but through AARP.

Now, that is not to say all benefits are expensive. Ceridwen and I have both our cell phones through AARP Consumer Cellular. We get really good service with really good smart phones.

On the other hand, both of us have been enrolled in AARP Medicare Rx Plus (administered by United Healthcare).  I’ve had a good experience with my plan, but the company denied Ceridwen her Armour Thyroid and her Tramadol, both of which she has taken for over 15 years.  Armour Thyroid is not in there formulary. They said that only an 8 day supply of the Tramadol could be filled.  So, she took her business to Costco Pharmacy. Over 2021 she shelled out $1,088 for these two medications.

In December Medcare assigned her to a different company.  The new company had no qualms about giving her a 30 day supply of Tramadol, but stated that the Armour Thyroid was not in their formulary, and so they only paid for one month. BUT – they also said that a physicians note of appeal could bring them around.  So our physician told them that Ceridwen is allergic to other synthetic thyroid medications, and so they covered it. Each medication costs her $1.35 each month.

We’ve sent a letter to United Healthcare, demanding a refund of $1,088. No answer yet. She has filed a complaint with AARP, so we’re waiting on a reaction.

In a tread on Next Door, it was noted that an eighty year old hamburger dive was going out of business. Some folk immediately blamed the advent of an In-N-Out Burger (since April 2021) as the cause, calling In-N-Out a giant corporation “sucking the life out of local business,” ad infinitum, ad nauseum.

Here’s the truth of the matter:

In-N-Out Burger is an iconic California eatery.  It is a privately (family) owned corporation. The stock is not traded on any stock exchange. To acquire stock you have to be a Snyder family member. In fact in order to get an In-N-Out here, a family member had to decide to relocate his/her family here, as management are always family members. They pay their workers $15 – $18+ per hour and supply above average benefits for a fast food restaurant – actually, for many local business.. All of their ingredients ae locally sourced, as much as possible. They seem to gear their hours for the stoner crowd. They are open until 2:00 AM every night. Their prices ae way below what they should be for the quality you receive. For example. for just under $8 you can get a cheeseburger, fries and a Coke.  That’s the good news. The BAD news is that they include little Xtian bible verses on every cup and wrapper  (not the whole verse, just the reference (i.e., John 3:16 rather than “For God so…”) and not overtly.  You have to be looking for it. On the cups it’s written inside the bottom edge. On the French fry trays, it’s on the bottom. Probably the easiest place to find it is on the outer burger wrapper (on the back, near the bottom).

According to public records, as late as 2020, Snyder family members (not the corporation)  had given money to both the Democratic Party and the Republican Party (See https://www.opensecrets.org/orgs/in-n-out-burger/summary?id=D000072295). It should be noted that they gave money to Bernie Sanders, Elizabeth Warren, Joe Biden, Alexandria Ocasio-Cortez and Beto O’Rourke.  Someone among them did donate $10,000 to the California Republican Party and $7,000 to Donald Trump.
I read an article that claimed the company was anti LGBTQ, but that charge was tied to a Bay Area locations anti-mask, anti-vax assertions, which turned out to be the preference of that particular manager, and not a company stance. How do you jump from an anti-mask stance to an anti LGBTQ one? Oh wait, it’s those bible versus. The Snyders are Xtians therefore they MUST also be anti-LGBTQ. Nice broad brush, written with no evidence.
This single article, an opinion piece in the SF Chronicle, contains these spurious allegations. In doing a little research into this, I have not found even one other article anywhere stating such. And here is the killer fact: I am acquainted with several employees at our local In-N-Out. Two of them are Gay. I wonder how they passed the “strict employee screening?” Or, perhaps the manager/family member of our local In-N-Out is a tad liberal? Maybe he/she is the one who contributed to Bernie and/or Elizabeth?
Our local In-N-Out has been totally in compliance with local mask mandates. The In-N-Out story is (mostly) revealed at https://en.wikipedia.org/wiki/In-N-Out_Burger
So, I guess what a handful of locals would prefer, is that In-N-Out Burger go out of business, and take the 100 (+/-) great paying jobs (with good benefits – it’s not likely In-N-Out will unionize, nor does it seem they would ever need to) with them.
Mike’s Hamburger King, the eatery going out of business, is well known for campaigning for Donald Trump and for supporting Rush Limbaugh. 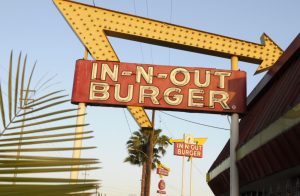 There are hidden contradictions in the minds of people who “love Nature” while deploring the “artificialities” with which “Man has spoiled ‘Nature.””

The obvious contradiction lies in their choice of words, which imply that Man and his artifacts are NOT part of “Nature” — but beavers and dams are. But the contradictions go deeper than this prima facie absurdity. In declaring his love for a beaver dam (erected by beavers for beavers’ purposes) and his hatred of dams erected by men (for the purposes of men) the “Naturalist” reveals his hatred for his own race — i.e., his own self hatred.

In the case of “Naturalists” such self-hatred is understandable; they are a very sorry lot. But hatred is too strong an emotion to feel toward them; pity and contempt are the most they rate.

As for me, willy-nilly, I am a man, not a beaver, and Homo Sapiens is the only race I have or can have. Fortunately for me, I like being a part of a race made up of women and men — it strikes me as a fine arrangement and perfectly “natural.”

Believe it or not, there were “Naturalists” who opposed the first flight to old Earth’s Moon as being “unnatural” and a “despoiling of Nature.”

If man is a part of “Nature,” and I believe we are, how can we produce anything that is not natural? Everything that we can make anything out of occurs in Nature, and nowhere else. Just like the beaver, we produce things for our own use and (generally) for the good of our fellow human kind.

On the other hand, there is evidence that suggests that Homo Sapiens is not indigenous to this planet. Our spinal cords do not seem to be made for the gravity on this planet. This explains why millions of people endure back problems. Of course it could mean that gravity on the planet increased after our evolution.

I really don’t know. Do you? Does anyone?