The Four Spiritual Laws is an evangelical tract written by Bill Bright for the organization, Campus Crusade for Christ.  I first encountered it when I was about 18. I had a bad breakup with my first girl friend, and I was facing my birth date in a particularly vulnerable state.  I had the habit (which I still have today) of doing Yoga meditation.  On this particular occasion,  I sought out something to meditate upon, and found The Four Spiritual Laws sitting on my bedside table.

In my meditative state, I read it. I read it three times, and I said to myself, “Ok, I’ll try this.”  I recited the “sinners prayer” as prescribed in the booklet, and in that moment gave my heart to Christ. I became a “Born Again Christian.”  A “Messianic Jew.”  For the next ten years (in between which I got married and fathered three boys) I studied the Christian Bible (consisting of the Tenach and the “New Testament”), reading through it probably two or three times a year.  Funny thing. By the time I reached my 28th birthday, I had read enough that I now perceived that the whole doctrine of Christianity was utter and complete bullshit.  This was through reading the Bible.  Christian ministers also influenced this, as much of the time they talked out of both sides of their mouth.  The straw that broke the camels back though, was when the Pastor of the church I belonged to at the time, The Peoples Church, said from the pulpit: “People don’t end up in hell for their sins, they end up in hell for not loving Jesus.” 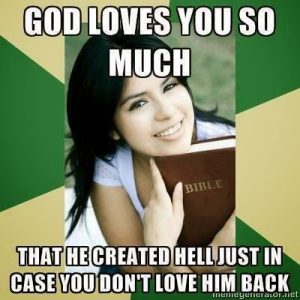 WHAT!  And I knew he was telling the truth.  Suddenly, the God of Abraham, Issac and Jacob was revealed to be a narcissist. A mad man. I wanted nothing more to do with this. I became, in that instance, right there in the pew, an Atheist.  Astrologers will tell you that what I experienced is called the Saturn Return. This is when the planet Saturn returns to that point in your chart where it was at the time of your birth, which takes twenty eight years.

But I have digressed. This missive is about the fallacies contained in the booklet, The Four Spiritual Laws.

Law # One: God loves you and has a wonderful plan for your life.  Really, there is nothing wrong with this idea. Of course God loves you! YOU ARE GOD! We’re all God. So, let’s move on to the second law.

Law # Two: Man is sinful and separated from God, so we cannot know Him personally or experience His love.   The first fallacy is that God has a gender. God is composed of multiple genders and trans genders.  The second fallacy is that we can be separated from God. How can you separate yourself from your self?  The only way to do that is to break yourself apart. This is strictly an intellectual exercise.  What is sin? Sin is doing bad stuff.  Sin is practicing wrongfulness to God, which in essence is doing harm to another human being, or to Nature or yourself.  But people do bad stuff all the time.  Christians will say that the bad things are enumerated in the ten commandments.  Jews will say they are enumerated not only in the ten commandments but throughout the whole of the Torah.  That’s too complicated in my opinion.  Sin is harming yourself, another human, or nature, which is the same as harming God, which is the same as harming yourself.  The first, and very worst sin: Not recognizing that you are God.  If you would just embrace that you and everyone else on this planet is God, you would never be able to sin again.  We would eradicate war, poverty, ignorance and disease. So the whole premise that man is sinful is a lie. The premise that we are separated from God, is also a lie.

Law # Three: Jesus Christ is God’s only provision for man’s sin. Through Him alone we can know God personally and experience God’s love.  The “provision for man’s sin” is for a man or woman to come to the realization that we are God. That’s it.  So that is the first lie here. The second is Jesus: there is ample evidence that Jesus never existed. The history goes against the existence of an historical Jesus. There are a ton of contradictions between the four Gospel accounts.  Here’s a few: the town of Nazareth did not exist during the time period that Jesus is alleged to have lived. There is no record of Herod sending his troops to massacre any children in Bethlehem.  There is a record of a man named Jesus being crucified.  In fact there are hundreds. Jesus was as common a name among Jews in that time as it is is among Mexicans today. Not a single one of them had their crimes inscribed on a sign hanging at the top of the cross. The Gospels themselves are not “eye witness” but in fact were written over fifty years after the alleged crucifixion (Note: In that time period, the majority did not live much past 35). There is a ton of this kind of stuff.

Law # Four: We must individually receive Jesus Christ as Savior and Lord; then we can know God personally and experience His love.  The problem here is an impossible exercise to experience something that the normal human being experiences every day of their lives.  1) You can’t receive someone who never existed.  2) We know God personally and experience their love simply by breathing. YOU ARE GOD! GOD IS YOU! There is nothing you can do to change this, except, denying that it’s true. 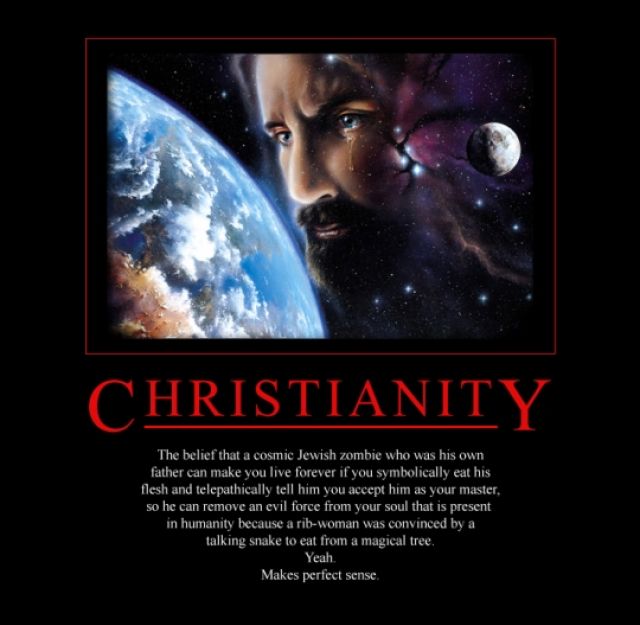