He is also known as Osho.

I recently completed watching the Netflix Documentary, “Wild. Wild, Country.”  It is a very well done. six part series, concerning Osho (The Bhagwan Rajneesh) and his attempt to establish an intentional community in rural Oregon in 1981.

I’ve always felt that the man was very wise, perhaps even a Boddhisatva, I can really relate, as I too dream of just such a spiritual community to be established here in the Redwoods of Northern California.

The documentary interviewed lots of people who were involved, on both sides of the controversy.

My take: Osho’s first mistake was trusting Sheila. She was probably alright in the beginning, but she very quickly became bat-shit- crazy, and ultimately it was her and only her who was responsible for the demise of Rajneeshpuram.   First, the last place you should try a project like this is rural Oregon. The people are there are backwards, redneck, racist Xians.  They would never accept brown people practicing any form of Hinduism. If Rajneeshpuram had been established in California, there would probably have been no problem. Take for example the intentional community called Ananda. It’s a successful version of Osho’s vision, that has thrived for some fifty years.

Now Osho had some other things that would not be acceptable to redneck racist Christians:

So those were the main “sins.”  He was accused of a lot of stuff, but it was Sheila who did the bulk of the dirty deeds. Osho was not aware of this stuff.

The worst thing, I think, was the way the Government broke him.  Osho was a old man with deteriorating health.  When he tried to flee the country aboard a Learjet, that plane had to refuel, and it was in Charlotte North Carolina where the aircraft was being refueled that agents of our Government captured him.  It took four hours for him to fly from Rajneeshpuram to Charlotte NC. but the US Marshalls took him from facility to facility in shackles for three weeks, which was clearly reckless and abusive. In the end he pled guilty to all charges because he just didn’t have the physical stamina, at his age, to fight anymore. Shortly after he returned to India he passed away.

Osho was a saint. Our Government, and the rednecks of Oregon, made him a martyr.

I bring this up because after posting a meme of one of Osho’s quotes, my middle son asked me if I had seen another documentary about what happened in Oregon.  I was never able to find that particular video, but when Netflix released this one, I jumped on it.  Now, up until this time I have refrained from posting any Osho memes, because of my middle sons concern.

Well, that’s not going to happen again. Osho was innocent. He as for all intents and purposes a saint, a very wise holy man, and from this time forward I will post his memes. 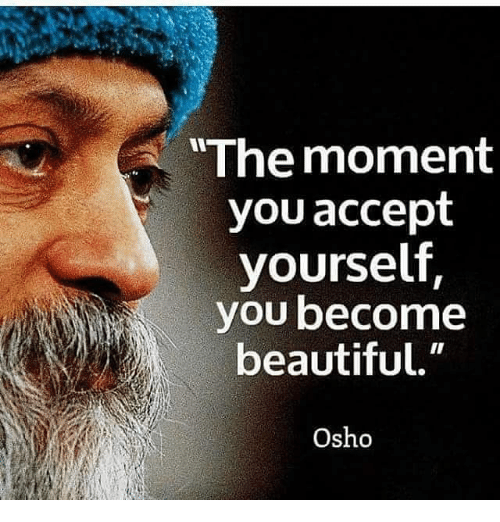