I just finished reading Bill Dunlaps fascinating, 22 post dissertation comparing Libertarians to Facists/Nazis and came away with some new insights into the Libertarian mindset.
It’s all about supporting the corporate takeover of our country. It’s all about the superiority of the rights of corporations over individuals. It’s crazily ironic on several levels. The first part of the series begins here: http://billdunlap.wordpress.com/2008/08/25/government-of-the-corporations-by-the-corporations-and-for-the-corporations/ It did give me a revelation though about why many Pagans are attracted to Libertarianism. It’s about restoring the aristocracy (you know, the guys we overthrew in 1776). Pagans love Ren Faires and love the SCA and all things medieval (odd because we didn’t fare all that well back then – people getting burned at the stake and all that), and like to imagine themselves as being the royalty and lording it over the serfs and all. So a political stance that promises to bring that all back is right up their alleys it seems.
It frustrates me to see Pagans embrace these ideas. Most Pagans don’t have, and are not in the position, to ever acquire the kind of wealth it takes to benefit from Libertarianism. Most aren’t paying taxes, or are paying very little in taxes, in the first place.  Most have no health care or are paying through the nose for it. Most live from paycheck to paycheck and are one or two paychecks from being homeless. These are all conditions that would be utterly exacerbated if Libertarianism became the dominant paradigm (actually Bill says it has become that already — I’m not sure I agree).
I’m a good example. I mostly lost my IRA because of the way it was invested. The lack of regulation in the financial industry which was the direct cause of the depression we are now in, caused my IRA to go belly up. I’m recently laid off from my job at Gottschalks, which, due to the double of whammy of really poor management at the top and the economy in general, has closed after 105 years. I couldn’t afford the companies health care package when I was working for them, so there’s no loss there really.

So yes, I’m for a single payer national health care system. I’m also for the Employee Free Choice Act. I’m very, very pro-union (I’ve been a card carrying member of the IWW for years, but that’s more a symbolic gesture than anything). I think twenty + years working in retail (including about 10 in management) may have turned me into a Socialist. My father retired from his position with a major company in 1981. He was never in management, never more than a grunt really. But, my mother never worked. Dad sent me and my brother through parochial schools. They owned their own home. They bought a new car every 2-3 years. Dad took us on vacation every year to either Northern Wisconsin or Minnesota, to one of those fishing lodges where we spent two weeks. When my mom got breast cancer, the companies insurance paid for EVERYTHING. My dad didn’t even have to pay for an aspirin.
What is the major difference between then and now? Dads company was unionised back then. My company was not. Actually, most – possibly all – companies were unionized up until the mid 80’s. That’s when workers living conditions began to decline, but no one seemed to notice. As I have pointed out before, and as Bill Dunlop so eloquently states in his articles, the Libertarian influence over us began with Ronald Reagans White House, which is also when our (working class) standard of living began to deteriorate.
Don’t take my word for any of this. Read Dunlops blog starting here: http://billdunlap.wordpress.com/2008/08/25/government-of-the-corporations-by-the-corporations-and-for-the-corporations/I don’t agree with every word Bill says here. I think he is overly harsh about the Church of All Worlds  (and in later posts, he actually back tracks on that stuff some), and I’m hoping he’s wrong about Obama, but otherwise he paints a pretty accurate picture of Libertarians. 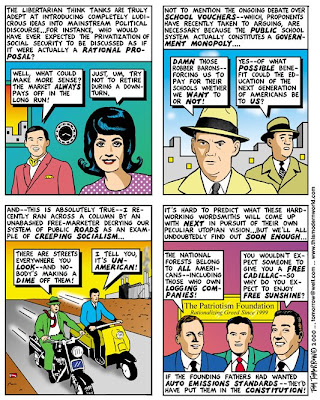