This essay is a part of The Druid Path, a 12 part curriculum designed to teach the fundamentals of Reformed Druidism.

“Druids are a problematical bunch.”
~ Dr. J.D. Hill, curator of the Iron Age Collections in the Department of Prehistory and Europe at the
British Museum

“All that we know about the Druids is that they were the most highly
respected magical practitioners and spiritual experts of the tribes of
northwest Europe. The trouble is that we don’t have a single word of writing
left by a Druid, and we don’t have a single archeological artifact that
everyone agrees is associated with the Druids. We know so little about
them in fact that they are almost legendary characters.“
~~ Prof. Ronald Hutton, historian, Bristol Univ. (UK)

“Although the Celts had a rich and pervasive religious culture, it has been
permanently lost to human memory.”
— Richard Hooker

“All gods are homemade, and it is we who pull their strings, and so, give
them the power to pull ours.“
~~ Aldous Huxley

I’d like to be able to say that Reformed Druidism is an ancient tradition handed down from generation to generation and practiced by the Druids of ancient Gaul. I’d love to be able to say that, but it’s not true. Reformed Druidism is a tradition made up from whole cloth and with little historical background to support it. The founders of the Reform drew from a lot of other traditions, and reinterpreted a lot of data to make it all work.

The fact of the matter is no one really knows what the ancient Druids did because they left no written record. We can surmise about some things from the archaeological record. For example, we know that they left sacrifices to their Gods in the form of beautiful, intricately decorated, very expensive items such as swords, helmets, shields, jewelry etc., in ponds, rivers, creeks, lakes, bogs and other watery places. Most of these items appear to have been made for this one purpose alone. Caesar reports that the Druids wore white robes, but other than his word for this we have no evidence whatsoever.

“It is more likely you would have chaps with no robes at
all, in fact, no clothes at all; probably painted blue and
probably stoned out of their heads on magic mushrooms…”
~~ Dr. Francis Pryor, Dept. Archaeology, University of Nottingham

Caesar also wrote that the Druids performed human sacrifices utilizing huge, hollow, man shaped cages made of wicker. He alleges that victims were trapped inside these wicker men and burned alive. But his is the only record of such. There is no archeological evidence to support the practice and Caesar was no friend of the Celts. Like our former President Bush and his “weapons of mass destruction” Caesar created an elaborate excuse to invade the lands of the Celts and vilify their Priesthood. Caesar’s writings are thus suspect and not authoritative. The traditions and teachings of ancient Druidism were transmitted orally. We therefore have no real idea other than best guessing, wishful thinking, and in very rare instances where the archeological record has yielded something, “educated  guesses,” about what the Druids taught, believed or what they did. Modern Druids like Ar nDraiocht Fein, OBOD, Henge of Keltria, and yes, we Reformed Druids, are someone’s ideas of what Druidism should be or might have been.

“Most of what you see in newspapers, the internet, and around Stonehenge
is based upon a recreation of Druidry…… I don’t think it has much reality in archaeology.”
~~ Dr. Francis Pryor, Dept. of Archaeology, University of Nottingham

Anyone telling you otherwise is either deluded or a liar or possibly both. Or they may have their own agenda. There are a lot of control freaks out there in Druidland (just like religion in general). There are all kinds of books about Druids out there and we‘ve pretty much read them all. There are all sorts of interpretations about Druidry. But that‘s what they are: interpretations: educated guesses at best, fantasies at worst. The best Druidic groups either attempt to fit together what we do know based on mythology (like the Mabinogion) and archeological findings or do what we and other Reformed Druid groups have done make up something completely different based upon a spiritual relationship with Nature.

“Druidry is not a complicated path. It may not even be a path. Appreciating
it involves reorienting oneself so that one can approach the mysterious, the
feminine, the Arts, both esthetic and esoteric, in away that allows us to let
go of our assumptions and presumptions about life and instead carries us,
as in a Druid ceremony, around the circle of our life towards the still point at
the centre of which is both our True Self and the Divine Source.”
~~ Phillip Carr-Gomm

The Reformed Druid Movement began with the Reformed Druids of North America (RDNA): RDNA Founder David Fisher: (On how the Druids were started) “One night Norman Nelson, Howard Cherniack, and myself were having one drink too many and were trying to figure out what we could do to deal with this (religious) requirement.” Back in 1963 at Carleton College in Northfield, MN USA, some students objected to a mandatory attendance of religious services so they protested by creating a bizarre group and attending it regularly. The requirement was thus mocked and was withdrawn. Members found it groovy and continued to participate in the group in order to explore world faiths and personal paths in an open and honest way. As they graduated, they started groups in other states. By the 1980’s there were about 10 groves scattered across the country. Then Isaac Bonewits left to form Ar nDraiocht Fein (ADF) Druidism which later splintered and soon Henge of Keltria Druidism appeared. Nowadays, there are lots of sophisticated groups in America that can trace their roots to RDNA which still putters about. 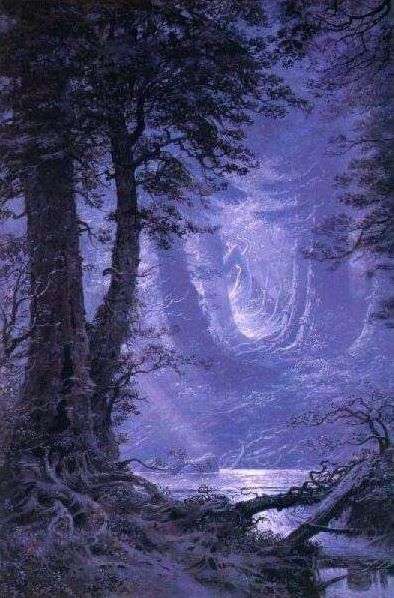 Order of the Mithril Star (OMS), began as a schism from Church of All Worlds (CAW) which was named after a religious group in Robert A. Heinlein’s 1962 novel, Stranger In A Strange Land. A member of CAW, El Arseneau, began meeting with other members who had strong misgivings about CAW and about how its “nests” weren’t anything like the “nests” in Valentine Michael Smith’s (the principle character in Stranger, and founder of the mythical church) CAW. We were all seeking community in our chosen paths and the structure of CAW “should” have been conducive to the formation of strong intentional communities. But it wasn’t there and though we strived to find it there it was like seeking the proverbial needle in a haystack. In a series of meetings over a six month period OMS (then known as “Covenant of The Mithril Star”) was implanted in the womb of Gaia. A year or so later we were introduced to the Reformed Druids of North America (RDNA) . You could say it was “love at first byte” as we immediately noticed that we already had adopted much of the ritual and philosophy of the  RDNA. It seemed natural then that we should all join it and thus OMS became one of the RDNA “special orders.”

The next major evolutionary turn came for us on Samhain of 2003 when Ceridwen Seren-Ddaear became Matriarch of OMS. She is credited with “sanding off our rough edges;” connecting us more with the Welsh-Breton cultural tradition and bringing a less formal and more relaxed attitude to our rituals. During that summer, (on the Yahoo group, rdnatalk) OMS was experiencing some rejection by some of the more legalistic members of (what was later discovered to be) New Reformed Druids of North America (NRDNA) . Mainly, they disliked the CAWish aspects we were introducing to Reformed Druidism, namely our acceptance/promotion of the lifestyles of naturism and polyfidelity. Eventually, when the politics became too heated, Matriarch Ceridwen proclaimed us to be “in schism” from the RDNA in an attempt to bring about Peace between the warring parties. Then during the New Moon of July, 2006 Ceridwen had a vision. It was as if Dalon ap Landu himself had appeared to her and told her that it was time for the Reformed  Druid paradigm to be expanded. OMS had over the years gained members outside of North America and now enjoys representation in thirty-three countries world wide. Matriarch Ceridwen’s vision became clear: Reformed Druidism had outgrown North America and so it was time for a new canopy organization to evolve. Thus was the idea of an International collective of Reformed Druids conceived. Over the next few weeks the idea gestated like a child in it’s mother’s womb and finally on the weekend of Mabon during the 2006 West Coast Gathering of Reformed Druids at Humboldt Redwoods State Park the Reformed Druids of Gaia (RDG) was born.

The RDG is headquartered in Eureka CA. About 6,170+ members, 12 groves and 4 Orders are currently registered with the Mother Grove with more coming in on an almost daily basis. The RDG is thus the vanguard of international Reformed Druidism. In addition there are some 4,000+/- Druids who identify themselves as Reformed who are not registered but who are considered to be de facto members of the RDG.

We have a friend down in Southern California named Jim Fox-Davis. He is a High Priest of the Ancient Keltic Church and more or less a scholar of Celtic religion and philosophy. His maxim is “We’re doing religion the old fashioned way – we’re making it up as we go!” That’s our maxim as well. Any one of you can start your own tradition – right now in fact. Any of you are just as qualified as anyone else to start something completely different. The key is belief (which we’ll be discussing that later on). Now, there are lots of folks out there who will differ with me on this. They’ll say that you need years of training under the tutelage of such-and-such master so-and-so who trained under who’s-it’s from the whatever-tradition. It’s mostly
poppycock. RDNA Founder, David Fisher: “Well, I suppose, given people’s need for alternative spiritualities, the Druids are like a template on a word processor that can be filled in with a number of contents.” The reality is that religion is the stuff of fantasy in the first place. There is very little difference between Mythology, Fiction (or Science Fiction) or Fantasy. Someone made it all up. Then someone else (or lots of someone else’s) believed in it. And presto! You have a new religion. David Fisher (On some of the sources of Reformed Druidism): “I must admit we were all readers of science fiction or science fantasy.”